I had a previous post about MTS using my calendar without my permission, but the situation has since been remedied so the post is no longer relevant nor appropriate.

Takeaway: Communication is key folks! This wouldn't have happened if any of us had reached out to the other party and started a conversation about it first. *feels dumb*
1 comment:

So, it's been a while since my last post, but I'm still here, I promise. I am pleased to announce that I am hosting a new contest!

Concept
Land is at a premium in the city and many older buildings are being removed for newer ones, but many older ones have history that is worth protecting. Every two weeks Sim City's Conservation Committee is review preservation applications for a different type of building in the city and they will choose to either preserve or demolish your build. While these building are deemed important, it is still required that they generate income and do not fall into disrepair. These buildings will have their original architecture respected and renovated for new use.

Head over to MTS's Sims 2 Contest section of their Community board to check it out!
No comments:

I'd been sitting on some free game time for Sims 4 for probably over a year now, and I finally took the plunge and played it.

I was dreading that I might have the same reaction to 4 as I had to 3. Play it for 45 mins and decide I entirely hate it. Happily that did not happen. I played 23 of my 48 hours. I made a self sim, played her for a while, got her pretty decently up the career track, made a best friend, and entirely failed at any romantic relationships for her. Slightly discouraged, I decided to give building a shot.

Building and decorating are some of my favorite things to do in 2, so I hoped I would enjoy it in 4 as well. For the first hour or so I struggled without the eye dropper tool. I had the tooltip lessons turned on, but it hadn't seen fit to tell me about my much needed eyedropper tool. Quite aggravating until I found the menu at the top of the screen. I had briefly played around with the room dragging tool, and it's a bunch of fun.

I was intrigued by the styled rooms, and I quickly found myself browsing the Gallery for interesting ones. After a quick google search, I learned how to upload rooms myself. After falling in love with the kitchen wall cabinets, I decided to make a kitchen. I went with some green industrial looking cabinets, and the rest of the kitchen evolved from there. I uploaded it to the Gallery.

To really get into building, I decided to recreate my popular Katrina Cottages. It's been a few years since I made them originally for TS2, and since then the architect has slimmed down her offerings. I had a heck of a time finding the original floor plan images for the discontinued houses. I did eventually track them down. As it turns out, a few of my houses were duplicates of each other, so instead of my original 25, I made 21 cottages. Since many of the houses are modular and they are all part of a set, I used the room push/pull tool to quickly make the entire set. 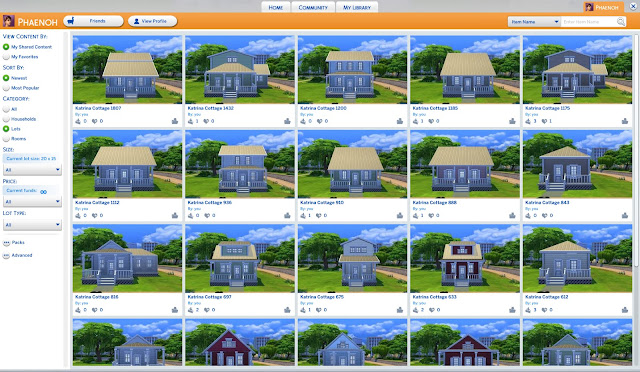 After each house, I saved it to My Library and started work on the next. It was pretty fun. I had to fix a few things with a few of the houses, and it was simple with the 'Place Lot' tool. Everything loaded quickly, and I wasn't bothered with the load screens, having came straight from TS2. Once everything was the way I wanted it, I uploaded each of the 21 little cottages. They range from 1 bed / 1 bath up to 5 bed / 4 bath. Most are under $10k, and all are under $20k. All have furnished kitchens and bathrooms, but nothing else. They are all on the small 20 x 15 lot size. You should be able to find them either by #katrinacottages or my Origin ID Phaenoh.

Email ThisBlogThis!Share to TwitterShare to FacebookShare to Pinterest
Labels: The Sims 4

Nearly a Year Ago Now

Oh wow, it's been nearly a year since my last post. I've been keeping pretty busy with my small business, Smallhouse Models.

I was devastated when I realized I couldn't finish my Pleasantview Renovate for my Creator Anniversary last July, but the project isn't scrubbed, it's just on the back burner. I moved out of state two weeks later and needed the time to pack. After the move it didn't seem as urgent because I missed the deadline.

I wasn't about to let another important yearly tradition slip past me. This year the calendar contest's theme is simply to embody that month with a sim in the scene. I've previously entered a January, July, and October months in years previous, so as an added challenge to myself, I can't repeat months I've done in years past. This year I got the idea to depict Groundhog's Day, so that's what I did. Move over Valentine's Day, you are so overdone. 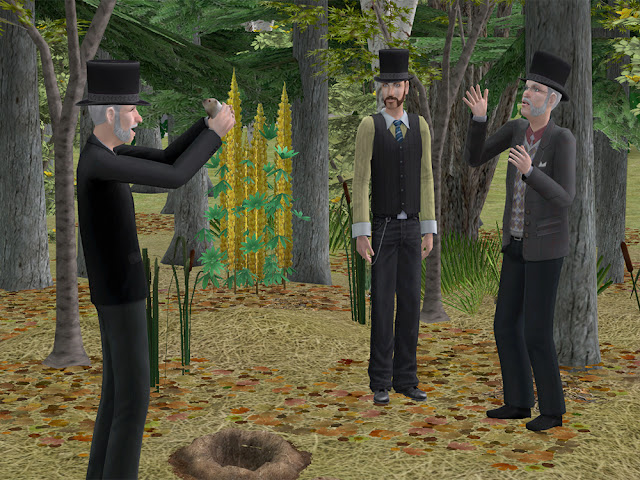 As some of you may have noticed, I have recently retired from staff at MTS. This is particularly bittersweet timing because usually I am involved in the creation of the yearly calendar content in game calendar. As I am no longer staff, I don't know what they are planning, but before I left I said I'd be happy to continue putting together the calendar after they've chosen the winners. It's been a very busy month and I wanted to enter two months as I usually do, but I only had the time to create this one image an hour before they were due. I was two minutes late by my post timestamp, so I hope that won't disqualify me. I also wanted to create something for the month of March. October is my favorite month because of Halloween, and March, being my birthday month, is a close second. I didn't even have a plan for what to do with it though, so no real loss. I love doing images with dramatic lighting. Here is my Mistress October. :)

This blog will let you know what I'm working on Sims-wise. I'm always juggling a few projects so that when I run into a road block on one, I can switch to another while I'm waiting for help or letting it stew in my sub-conscience.

I started this blog as a place to help me keep notes on projects. It helps my thinking process to be able to type things up and reread stuff later. I have a bunch of old notebooks and Word files containing lost and forgotten projects and I don't want that.

Feel free to comment on anything that sparks your interest. I'd love to hear your ideas on my projects. Nothing is too old or forgotten that it wouldn't enjoy a bit of commenting love. :)

Thanks for stopping by!
-Phae

I've got a poll going because I have too many things going on at once, and what I think might be a fantastic idea, might be a real loser. This helps me put time into the projects we both want to see get done. Thanks!

What Should I Work On?